Sustainability and Viability: Lessons from Scandinavia

I recently attended the Town and Country Planning Association’s Scandinavian Study Tour.  From to to , we saw examples of pioneering environmental technologies and sustainable city planning.

These are examples of the kind of sustainable development that the National Planning Policy Framework aspires to deliver.  So how are they able to do this and why isn’t it happening more often in the ?

Much is made of the so-called ‘win-win’ relationship between the environment and the economy, with greater efficiency leading to lower costs.  However, this ignores the important element of timing.   Creating developments with a high environmental performance tends to require greater costs in the design and construction phases.  In the , these costs are borne by the developer, who needs a relatively quick payback period in order to pay off loans and incentivise development.  In contrast, the financial benefits tend to be long-term in nature, and shared between the occupants of the development, the local authority and the developer.

In isolation, strong policy requirements for high environmental performance only place greater financial burdens on the developer in the design and construction phases.  The requirement in the National Planning Policy Framework for local authorities to ensure that policy burdens do not threaten viability means that, in the current economic climate, environmental performance will inevitably be compromised to ensure the delivery of development.

In and , the role of government, at city and national levels, goes way beyond the setting of policies.  They are the driving force behind these developments: setting targets, subsidising technologies, financing infrastructure and, in some cases, acting as the landowner and client.  Private developers build on the foundations set by government.

The is a long way off the Scandinavian model.  Even in cases where the government is the landowner, the overriding objective tends to be to achieve best value (just like a developer) rather than to achieve higher standards.

As long as there is sufficient public support, governments have a degree of freedom from short-term economic constraints that private developers do not.  However, it is unclear whether there is the will, within government or the public, to incur the short-term costs necessary to deliver the kind of sustainable development on show in , and .

Posted by alsop verrill at 03:40 No comments:


Research and Policy institute Centre for Cities launched ‘Outlook 1901’ on the 12th July 2012, which aimed to analyse whether we could or indeed should look to the past to help rebalance regional economies.

1901 marked a turning point for many of ’s once great regional cities. In the early 19th C the likes of , and Liverpool were challenging for supremacy, yet by the turn of the century had once more begun to reassert its power.  Today, the gap between the capital and once powerful regional centres is at an all time high

History has demonstrated that there are 3 key components to a successful city, they are: a skilled workforce; improved connectivity and a diverse economy. To help re-balance the picture and ensure that regional centres become more attractive places for business and for residents, we will consider each of these components in turn.

(Wiltshire) grew in the mid 19th C as a result of the expansion of the railways. The town developed a strong and highly skilled engineering based economy following the establishment of the Great Western Railway locomotive works in 1841. Although the works eventually closed in 1986, the town’s strong engineering heritage and the skills base this entitled ultimately attracted the car industry to , with Honda and BMW currently having significant manufacturing operations in the town.

The lack of comprehensive public transport networks within cities has long highlighted not just the divide between themselves and the capital, but also the increasing gap between equivalent regional centres on the European mainland.

According to Sir Peter Hall, France currently have approximately 100 new tram lines under construction. By comparison, the has just 1 and ½. In such schemes are seen not just as long term investments but also as marketing solutions to attract new businesses and highly skilled residents. This building boom of public transport networks is a result of cities having greater fiscal autonomy.

In the all major decisions have to go via in which, as Tony Travers explained, contributes to the lack of investment in the regions.  meanwhile, continues to benefit with continued investments to an already superior network.


"In the past those in the regions will have seen the need for extra capacity on the railways, need for a tramlines etc and acted on it, now they have to go to Whitehall where the civil servants making the decisions to allocate funds do not ‘see’ the need. They do however ‘see’ the need for extra capacity in London because they will be using such networks every day, leading to funds focused upon one place, where the civil servants live and work"

The investment has received in transport infrastructure projects over a sustained period of time has made the city a more attractive place for a diverse range of businesses and workers. As more workers descend on the capital the demand for more infrastructure therefore increases. The opposite could perhaps be said of many of our regional equivalents.

Preston (Lancashire) is a good example of a city outside of that has benefitted from transport infrastructure investment.  The city has grown to become one of the stronger centres in the of largely due to the construction of the town’s by-pass, ’s first motorway in 1958. This was an astute and pioneering move by the town’s forebears in the 1950’s  and  was the initial stage of a wider motorway network initiative in which the final stages (M60 Manchester By-pass) were completed only as recently as 2000 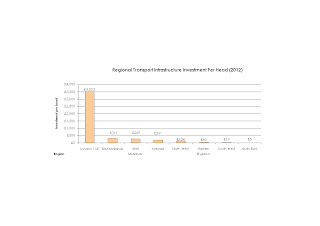 As the hub of this motorway network. has indeed prospered, enjoying access routes from all across the country .

Additionally, Peter Hall emphasized the importance of developing high speed rail sooner rather than later, noting that cities within 2 hours of were traditionally more successful.

It is important that a city does not become overly reliant on a particular sector and is able to adapt quickly and attract new industry.

was particularly successful at doing this, despite its reputation as a railway town. Through strong leadership in the 1970's and 1980's and with railway jobs under threat, the council devised a pro-active marketing strategy aimed at
American electronic and pharmaceutical companies.

As a result, during the 1979 – 83 recession, and despite the phased closure of the railway works manufacturing, employment in the town grew by 3% compared with a 11% drop nationally. Additionally, service sector employment grew by nearly 9% as a result of the spin off industries. The town today has a diverse and highly skilled economy Additionally, Peter Hall emphasized the importance of developing high speed rail sooner rather than later, noting that cities within 2 hours of were traditionally more successful.


The capacity for local business and local political elites to make decisions has significantly reduced since the 19th C as power has transferred to . This has dis-empowered our regional cities in the decision making process.

Centre for Cities conclude that the government should sustain investment in skills and in infrastructure. They should work with local authorities to identify targeted investment opportunities and devolve major transport scheme funding to functional economic areas.

Short term cuts in expenditure on the key drives of economic success are ultimately to result in a larger long term bills.

All in all the debate was lively and interesting and could be a springboard for future dialogue in revitalizing regional economies.

Posted by alsop verrill at 08:05 No comments:

Alsop Verrill was formed in June 1991 and became a Limited Company in October 2011. The team of Chartered Town Planners is led by Malcolm Alsop. The team members have a range of specialist expertise including retail, heritage and environmental planning.